Umphh. Umphh. My eyes blinked open in alarm and confusion as the unfamiliar sound pierced the night air, instantly forming a knot in my gut. It was no human sound. At least, not one that I had ever heard. No, it was a low-pitched guttural cry — something raw, distinctive, and primal. Umphh. Again, the primal call cut through the darkness, sending another wave of chills up and down my spine.

As I laid paralyzed in fear, the fog of my slumber gradually lifted, allowing pieces of reality to slip into place. Rick and I weren’t snuggled side by side on our king-size bed. No. He was sleeping in a narrow bunk, similar to mine, six feet away. The new sleeping arrangement wasn’t behind the secure walls of our rural Idaho home. We were behind the canvas panels of a wall tent. But unlike most of our outdoor excursions, we weren’t in Idaho’s backcountry wilderness. The distinctive umphh belonged to none of the wild critters we were familiar with. Instead, we were in a remote expanse of the Tanzanian bush: an exotic land where the people, terrain, and animals were far different than anything we had ever experienced; a place where lions, hyenas, leopards, and elephants roamed freely throughout the landscape.

Three days of international travel and sensory overload had turned us into little more than zombies when we crawled into our beds earlier that first night. Accordingly, we expected to fall asleep as soon as we hit the sheets. That didn’t happen. The second the generator spit to silence and the staff vanished into their quarters, the din of camp life was replaced by an unfamiliar barrage of primal voices. Whoop whoooooop whoop followed by eerie chortles, heeheehees, and cackles. Then another whhhoopp whooop.

“Hyenas.” Rick whispered from the darkness across the tent.

Fisi, I thought to myself. The animal’s Swahili name had been used at dinner in the retelling of a gruesome story, a tale that might have been better left unsaid, especially with a fearful reluctant greenhorn like me gobbling up every word.

Lying wide-eyed, I listened to Fisi’s insane chorus – an ensemble of squeals, roars, growls, and a maniac-like hysteria – as it seeped through the canvas barrier from every direction.

Next, a deep bellowing oozed through the tent’s walls. With this new vocal came Rick’s best guess, “Has to be a hippo.”

The next few hours continued like that, with Rick doing his best to decipher each new dialogue. A conglomeration of chittering, chattering, cooing, cawing, shrieking, growling, grunting, and crying. A symphony, so to speak, of bestial serenades.

Then about 2:00 a.m., the umphh cut through the tent walls; the bestial grunt sounded nothing like the king of beast’s ferocious roars from MGM movie introductions. Still, there was little doubt that the foreboding sound belonged to anything other than a real, live, honest-to-goodness African lion. Simba, a simple but potent Swahili word. The dread I felt told me that it could be nothing else. We were, after all, in the heart of lion country: a fact that gave Masimba Camp its name.

The canvas walls, with eight mesh windows, offered little in the way of soundproofing. Even more alarming, the fabric provided laughable protection against deadly predators. Suddenly, our tent which had felt cozy and secure in the light of day felt vulnerable and exposed.

Tense energy filled the air as we listened to the lion’s guttural calls. After a few moments, Rick whispered, “Our first lion.”

With my gut twisted in a knot, a meek “aha” was all I could muster. Neither of us moved a muscle. We stayed frozen in our separate bunks with our ears focused on the unfamiliar sounds.

Eventually Rick’s hushed revelation, “Honey, we aren’t in Kansas anymore” was the straw that broke the camel’s back.

“No kidding!” I quietly hissed as I slid out of my cot and climbed into his. Cramped. Uncomfortable. Overflowing. It mattered not.

Finally, after years of anticipation, my African dream was coming true. It was nothing like I had envisioned, but nestled in a tent, hours from civilization, there was absolutely no turning back. Nor did I find myself wanting to. Even though apprehension filled my entire being, it became crystal clear that Rick’s version of the dream was far more than anything I could have imagined for myself.

No doubt, there would be difficult and unsettling moments. Rick would very likely be harvesting some of the creatures that I had treasured since childhood. It was also clear that our adventures would be partnered with aspects of danger. I couldn’t help wondering how my romanticized view of Africa, after dreaming about it for so many years, would stand against reality.

Even with uncertainty gnawing at me, my feelings of apprehension and exhaustion floundered as other emotions trickled to the surface. Fascination. Excitement. Awe. Astonishment. Curiosity. And thankfulness. Lying wide-eyed — covered in goosebumps listening to the chortles, bellows, growls, squeaks, whistles, cooing, cawing, whoooops, and umphhs of the African Symphony — I realized that I had never felt so terror-stricken and yet, at the same time, so alive and exhilarated by the promise of the days to come. 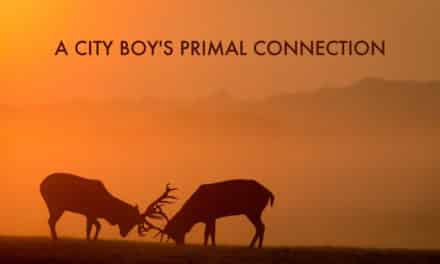 An Obsession with Quality From Vegan to Hunter