3 of the coolest, most useful wild plants in Western Canada

It’s only when you start to forage for food, that you see the land as the delicious and beautiful place it’s supposed to be. It’s how I’ve built up a connection to the land to call this home. Here are three of my favourite wild food species I’ve discovered along the way:

I first was introduced to Labrador Tea in 2017 at the From The Wild bush camp in the boreal forest outside of Edmonton, Canada. Ever since I’ve been intrigued by this beautiful little bush tea found all over Canada. Its fancy Latin name is Rhododendron Groenlandicum but I like to refer to it as ‘sleepy time tea’.

It’s safe to say that this shrub loves damp, shaded mossy areas (which is my favourite type of woods). The plant itself is stunning, which makes the identification process easier – long, oval-shaped brilliant green leaves with a burnt orange back that’s a bit fuzzy. Having harvesting them in Alberta and recently on the east coast, it was interesting to see how much longer the leaves were on Prince Edward Island. Taste-wise its mild, but aromatic – kind of like if green tea and evergreen had a baby with baking spices with this cinnamon vibe. But, for some, it also has this mushroom-y thing going on.

Being mindful about the fact that it’s a slow-growing plant – pick only a few leaves from each plant, instead of harvesting everything from the whole plant. Once harvested, just spread on a baking sheet and dry in the sun or in an oven with the pilot light on, then store in an airtight container until you’d like to play.

Our First Nations would use Labrador Tea for its medicinal properties – it’s pretty much an anti-inflammatory thing helping with burns, rheumatism, arthritis and asthma. According to Google, Labrador Tea is high in Vitamin C and for a long time was used to prevent scurvy – food is medicine and all. It’s also important to mention that you should avoid it if you’re pregnant and, like most wild foods, it’s always a good idea to do your research and use conscientiously.

Next, the tale of two mushrooms and the Birch Tree

The curiosities of wild food, and mushrooms, in particular, is fairly new to me, so airing on the side of caution is always a good plan – rule 1 is ‘don’t die’. With every walk in the woods, the words ‘ooh, that’s pretty’, quickly followed by ‘don’t know if it’s edible’ are often spoken. Mushrooms are pretty little things until you discover how many can poison you.

The Strop Mushroom grows exclusively on Birch trees (and monogamy is a good thing). But, the story gets dark and twisty – they start to grow on weakened Birch like a parasite and then thrive when the tree eventually dies.

Chaga is found on older (living) Birch trees which makes sense because it takes so long to grow (like 10 to 80+ years). It doesn’t look like a typical mushroom; it’s like a blistered heap of charcoal from the outside with this striking orange core. You’d need a strong utility knife to pry it off and you want to start outside in. If it’s mushy or found on a dead tree, you don’t want to harvest it.

When I forage, I’m mindful about the fact we share this ecosystem with other living things, so be sure to leave enough behind because sharing is caring. 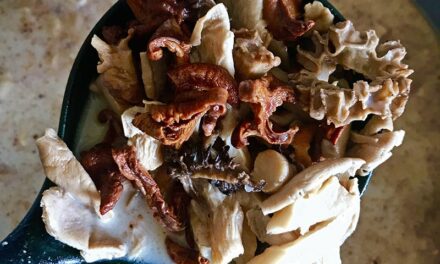 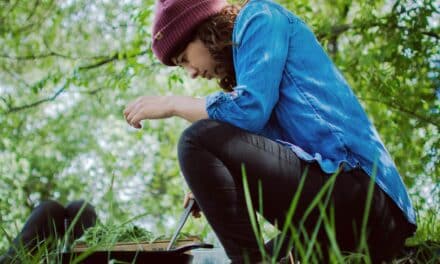 Why I Love Foraging for Food and How To Get Started Our Friends Have Been Loving This Fireweed Jelly Recipe