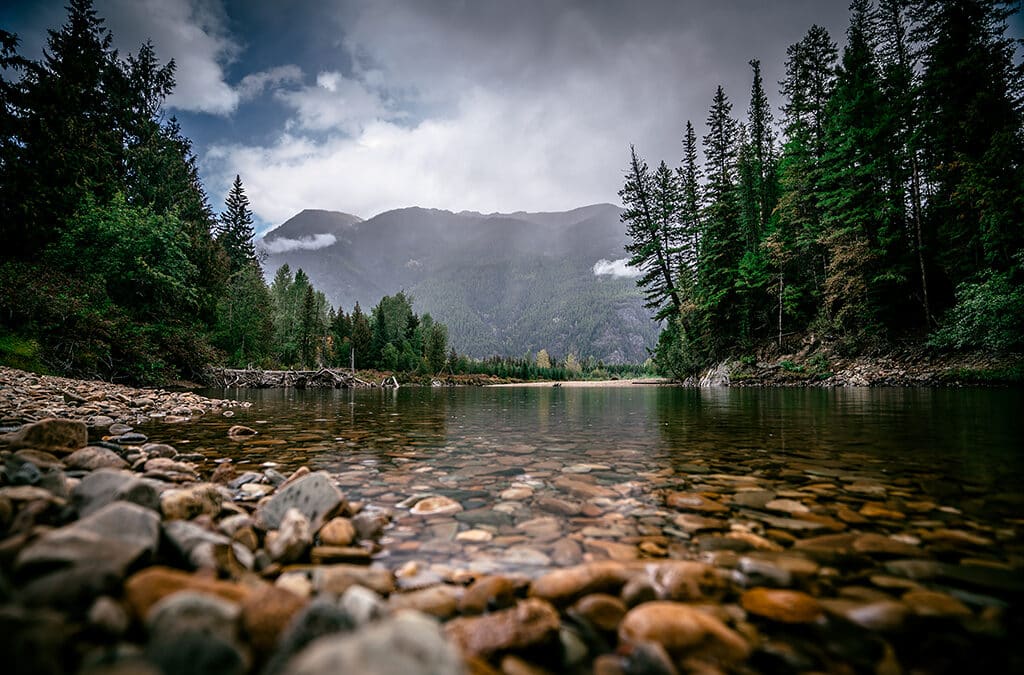 A Legacy for All British Columbians

My grandfather and I were close. He hailed from the small community of Marysville in Southeastern B.C and was a mine worker, logger, hunter and a trapper. I was born into his family and developed a strong sense of empathy for wild animals at an early age. Our love for wildlife and the outdoor lifestyle created a strong bond between grandfather and grandson.

Grandpa was the sole income earner for a family that saw 8 children needing to be fed, clothed and schooled over a 35-year span. Hunting and trapping were a necessity. Trapping supplemented Grandpa’s income, and hunting, along with gardening, were the primary ways he and my Grandmother provided for my father and all my aunts and uncles.

When I was younger, Grandpa and I hunted together. Between hunts, we would sit for hours in the back room as he tended the woodstove, recounting hunting trips and planning our next outing. From his rocking chair, he would retell the same family hunting stories time and again and teach me his views on wildlife and habitat management. He often reminisced about his younger days in the outdoors.

Grandpa was a busy man. He often met and tormented the local managers of wildlife and forestry or his local MLA with his concerns for wildlife and what was needed to better protect it. Grandpa also understood the importance of having dependable sources of funding to invest in wildlife management.

In the late 1970’s, he started a conversation with East Kootenay MLA Terry Segarty about how best to increase funding for wildlife management. Grandpa pitched the idea of having two taxes dedicated to fish and wildlife conservation:  one on outdoor gear and one for logging and mining companies. Over time, others joined in the conversation to help grow support for the ideas.

The Conservation Ball was Now in the Government’s Hands

MLA Segarty worked with the government of the day to advance this new conservation funding idea in the legislature. The tax was going to be a challenge for the provincial government to implement, especially on the province’s resource industries. So, the conversation evolved and began working around the idea of committing all the revenue from the sale of hunting, guiding, trapping and angling licenses to a dedicated conservation account.

In 1981, The Honourable Stephen Rogers, then Minister of the Environment, announced the creation of the Habitat Conservation Fund. Revenue for the Habitat Conservation Fund initially came from a voluntary surcharge on hunting, trapping, angling and guide-outfitter licenses. The Fund didn’t receive all the revenue from license sales as was first proposed. Some members of the BC Federation of Naturalists voluntarily contributed an amount matching the new license surcharge.

While the dream of having a wildlife conservation fund that could operate with considerably more revenue was not realized by its early architects, what did come out of this initiative was a major win for fish and wildlife conservation in the province because the creation of the Habitat Conservation Fund helped usher in an era of better funded wildlife research, land acquisitions and ecosystem restoration. The success in creating a dedicated conservation fund came about because of broad community support for a grassroots idea, a strong political will to enact it, and a compromise to find the balance between all those involved.

Legislated Funding: A Huge Win for Fish and Wildlife

By the end of 1981 British Columbia’s Wildlife Act had been amended to give statutory meaning to the new Habitat Conservation Fund. The statute amendment made the surcharge a mandatory part of the cost of hunting, trapping, angling and guide-outfitter licenses. A board of independent wildlife scientists, government Fish and Wildlife Branch staff and representatives from the user-pay groups were the first leaders to chart the course for the Habitat Conservation Fund.

In its formative years, money from the Fund paid for new government-led habitat restoration projects and acquisition of private lands that were important to wildlife. In the 1990’s, the Fund generated more money than it was spending on conservation projects. Talk began to surface that the Fund’s growing surplus was going to be transferred into the province’s general revenue coffers. Hunters, anglers, trappers and guide-outfitters united and opposed the transfer of any funds that were promised for fish and wildlife conservation into the government’s coffers for anything but fish and wildlife conservation.

Under the new legislation, non-government organizations including academic wildlife researchers and community groups could now apply for grants. In 2007, the Wildlife Act was once again amended and the present-day Habitat Conservation Trust Foundation emerged. The Foundation was now an entity at arms length from government, and control over the disbursement of grant monies shifted from government to the Foundation. The Foundation now had full autonomy to invest in public conservation projects while still maintaining statutory protection of the revenue created from the license surcharges.

Isn’t All This “Conservation” Just for Hunters?

User-benefit pay models help offset the costs associated with providing the things that the specific users want to use or enjoy. The notion of a user-benefit pay model has also been presented as a criticism of the Foundation’s model by the non-hunting community, often by their saying that the benefits conferred from the conservation projects are exclusive. About 70% of the annual revenue is generated from surcharges on hunting, trapping, angling and guide-outfitter licenses and game tags. Most of the remaining revenue for the Foundation comes from investment income and court awards (i.e., fines from environmental, wildlife and pollution violations ordered payable to the Foundation by a judge).

In 2018-19, the Habitat Conservation Trust Foundation awarded over $8 million dollars to a range of fish and wildlife projects that reflect the natural diversity of environmental values and user groups in Super Natural B.C. The benefits of these projects, however, are not exclusive to hunters, trappers, guide-outfitters or anglers. The mission of the HCTF is to improve conservation outcomes for B.C.’s fish and wildlife and the habitats in which they live. One of the Foundation’s goals is to increase British Columbian’s participation in environmental stewardship, education and responsible use.

Who Benefits from B.C.’s Only Legislated Wildlife Conservation Funding Model?

Funds were also awarded for sturgeon, steelhead and trout conservation projects, the removal of “ghost nets” from the Fraser River, fish and wildlife population counts, management of conservation lands, the Invasive Mussels Monitoring Program, removal of invasive plants, restoration of B.C.’s rare and endangered Garry Oak ecosystem, land acquisitions, the NatureKids BC program and dozens of other projects that are spread out across the entire province. Over 40% of this year’s funds were aimed at projects that benefit multiple species of flora and fauna in a single project.

Since the Foundation is a user-benefit pay system, some of the user’s funds are used to directly enhance hunting, trapping and fishing opportunities. Despite the fact 70% of the Foundation’s annual revenue is currently coming directly from the hunting, trapping, angling, and guide-outfitting communities a lot more citizens and industries in the province are enjoying benefits of these funded projects without having to contribute.

Should More Users be Contributing to Conservation?

The argument that the hunting community only engages in conservation, so they can kill more animals is quite simply not true. Hunters, trappers, anglers and guide-outfitters are as dedicated to protecting biodiversity as anyone and they are willing to do their part for conservation and more if necessary. But if these conservationists that are so dedicated to contributing more dollars were to disappear from society then fish, wildlife and their habitats will suffer.

Even with all this amazing conservation work and funding from Habitat Conservation Trust Foundation, B.C. is still falling behind in its obligations to protect biodiversity. The growing needs of conservation in the province are outstripping the public resources available. B.C. is not investing in Super Natural BC at a level commensurate with the breadth and depth of the province’s biodiversity, the spectrum of growing outdoor user groups or the rate of natural resource extraction.

B.C. is one of the largest and most biologically diverse jurisdictions in North America, yet the total amount spent on fish, wildlife and habitat management is among the lowest. On a per capita, per hectare and per species basis, B.C. spends less on biodiversity conservation than the province’s neighbouring jurisdictions.

In 1960, the budget for fish and wildlife management in B.C. accounted for 0.6% of the total provincial budget. Today, the budget for fish and wildlife management is an order of magnitude lower, accounting for about 0.06% of the provincial budget. Many hunters, guide-outfitters and trappers are advocating that all the revenue from their license and tags sales be dedicated directly to conservation in lieu of the smaller surcharge. Many hunters have stated they will accept paying more for licenses and tags if all the revenue were put back into managing wildlife and habitat. It’s not often a user group asks the government to pay more for something that benefits so many others, but hunters are.

The Passing of the Conservation Funding Torch

Being close to and caring about wildlife was the foundation of my Grandfathers’ values and passion for being in the outdoors. As he aged, his ability to go hunting with me diminished. In my early twenties, I moved away to attend university and we didn’t see each other as much as we used to, which was often daily. I was away in the big city studying and missed most of the hunting seasons back home. We had fewer days together in the woods and less time was spent together reminiscing.

The last time I visited him in the care facility, he did not know who I was. At his funeral, I sat there looking at a picture of an elk I painted for him resting on an easel next to his photo. I said goodbye and thanked him for the time we had together. I am proud of the legacy he left for me, his future great grandchildren and for all British Columbians – a legacy of conservation rooted in biodiversity and a legacy for all British Columbians to improve upon and pass onto the next generation. A legacy that was started by a hunter-trapper.

What is the Future of B.C.’s Conservation Funding?

Resident hunters, trappers, guide-outfitters and anglers are proud and honoured to have helped support so many conservation projects over the last several decades. But we can’t do it alone. The task is too large. It’s time to revisit old ideas.

Taxes on all outdoor equipment and gear collected as revenue for the Habitat Conservation Trust Foundation. Small shares deducted off crown land rent, tenures and natural resource royalties dedicated to conservation. A general backcountry outdoor license for all users with a surcharge to help the conservation of B.C.’s biodiversity. Imagine what could be done. One billion dollars for conservation? It’s doable if British Columbians get behind the idea of increasing revenue dedicated to conservation.

Everyone’s individual voices are equally important because Super Natural BC belongs to everyone, but a united collective voice for conservation will have a more positive impact on the future. While conversations between user groups are taking shape why not make a voluntarily donation to the Habitat Conservation Trust Foundation to show your support for conservation?

Mark holds a master’s degree in environmental science. He is a Professional Agrologist and retired Professional Forester. The focus of his career has revolved around environmental protection, ecosystem restoration and wildlife habitat management. Mark served on numerous Boards for conservation organizations including the British Columbia Wildlife Federation and the British Columbia Conservation Foundation. You can read more of his writings at www.hunterconservationist.ca.

Sign up for news, recipes, and upcoming event announcements

Learn More From These Articles