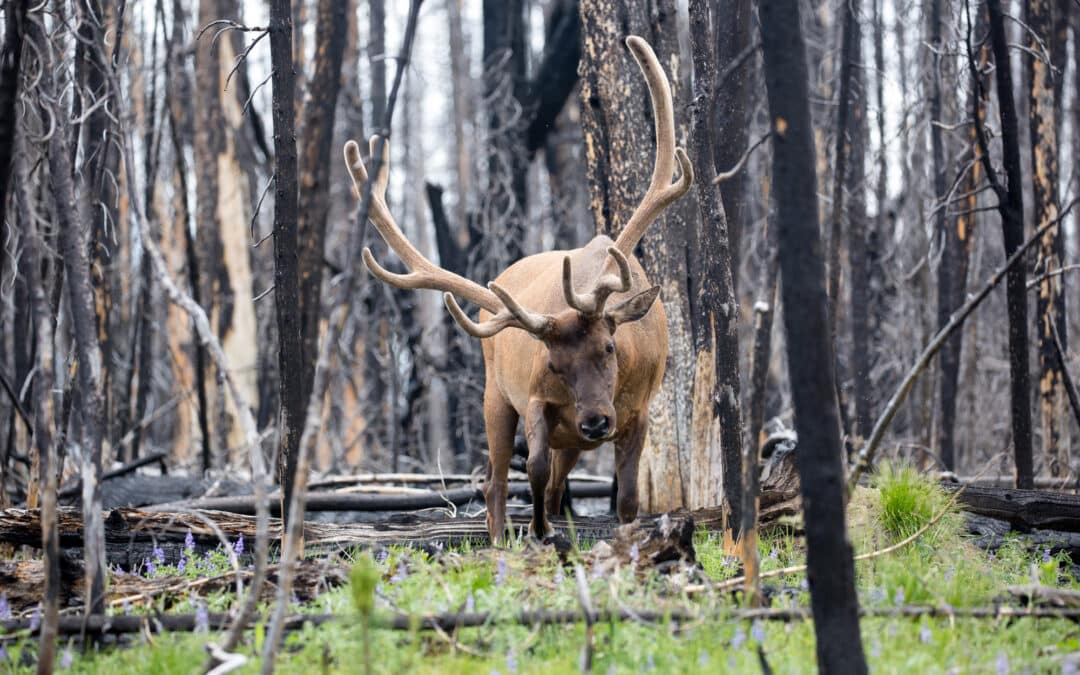 Wildfires are devastating for everyone and everything caught in their wake, wildlife included. But it’s not all doom and gloom; there is a silver lining to that smoky sky.

The forests that we live in and around are maintained by fire. Strange as it may sound to many, fires are natural in these systems. They have always burned, and they will likely continue to burn every ten to one-hundred years, depending on local conditions. This pattern of fire frequency and intensity is called the fire regime.

The fire regime is written into the growth rings and scars on trees. Looking back through this historic record, we see patterns that have remained unchanged over long periods of time. The human response to these patterns however, has changed drastically in the modern age.

Fire prevention and suppression policy via the iconic Smokey Bear campaign began in the 1930s and was in full force after 1945. Consequently, many dry conifer forests in southern B.C. missed several critically important fire cycles. As we have learned (the hard way) time and again, when it comes to complex, interconnected ecological relationships, when you change one variable, you are likely to impact another. In many cases with less than ideal, and unexpected outcomes.

Suppressing natural forest fires evolved from the practical need to protect valuable property, ranch lands, and people. For anyone who has experienced loss from fire first hand, suppressing fire is not something to question. Or is it? Perhaps some fires, in some places, should burn.

Fire ecologists tell us that the blanket fire suppression policies used in the past have created negative outcomes that actually outweigh the benefits of suppression. Complete fire suppression leaves forests with dead trees, dry branches, and aging trees prone to disease. This is all prime ignition material for small spot fires to spread, converge, and become massive burns.

In the summer of 2017, the monstrous Nazko Complex fire started as a series of smaller fires west of Quesnel. When they merged into one giant wildfire, the fire covered over 432,000 hectares, making up more than a third of the total 1.2 million hectares of B.C. that burnt in 2017.

Fire experts now fear that the suppression policies launched decades ago unwittingly created the intense conditions that now feed the fierce wildfires we are dealing with today.

The regular occurrence of fire reduces the amount of fuel that builds up in our forests, and is also a catalyst for increased biodiversity and a healthier ecosystem. Controlled or prescribed fires remove crowded forest canopies and consume dense conifer stands, allowing sunlight to hit the forest floor and germinate grasses and forbs favoured by animals like elk and mule deer. Controlled fires also boost production of berry bushes favoured by birds and bears alike. The standing dead trees that remain after a fire become homes for songbirds occupying the cavities that woodpeckers have excavated searching for insects.

Managed properly, the destructive nature of fire can be an effective habitat and wildlife management tool. These are tangible benefits that outweigh the costs, enough so that policies have transformed from fire suppression to fire management. We now see fire as necessary; we are prescribing fire and truly fighting fire with fire.

The change of policy from fire suppression to fire management is a classic paradigm shift, a fundamental change in approach and underlying assumptions. We seem to have arrived at a new way of thinking about the role of fire on the landscape. But in truth, it’s not so new.

Fire was an integral part of how indigenous communities “managed” habitat in B.C. long before contact with Europeans. Indigenous burning practices have been used for thousands of years as a way of manipulating plant communities. Thick forests offer little to the hunter or gatherer, and narrow trails near homes can be dangerous, providing concealment to enemies and predators. Routine burning of hunting grounds by indigenous communities across B.C. led to B.C.’s Chief Game Biologist James Hatter in 1961 referring to the indigenous people as “the province’s first game managers” in view of their use of prescribed fire to improve wildlife habitat.

Although the evidence is fragmentary, with the arrival of Europeans and the development of settlements, the frequency of fires likely increased dramatically, and correlated with this increase in fire, there was an increase in many wildlife populations. Consider the remarkable southward expansion of moose from northeastern B.C. to the coast and into southern B.C. between 1900 and 1945.

Similarly in the East Kootenays, the widespread fires of the 1930s appeared to boost the abundance of mule deer, white-tailed deer, elk, and bighorn sheep through the 1940s and 50s. Ironically, these accidental fires in the first half of the century likely created the most abundant ungulate populations in B.C. history. This historical perspective is important when considering the current state of many wildlife populations in southern B.C.

Wildlife species targeted for modern prescribed burning are primarily elk, mule deer, wild sheep, and white-tailed deer. The management goal is typically to enhance these animal populations by reconditioning and rejuvenating winter ranges. Fire is a critical tool in achieving these goals, and in ensuring these wildlife species continue to survive in an ecosystem increasingly impacted by human expansion and consumption.

In southern B.C. we have lost much of our viable wildlife habitat to urban development, farming, and mineral exploration. Wildlife managers today are faced with increased bureaucracy when planning prescribed fire to enhance wildlife habitat and populations. But, as noted above, the fire regime won’t wait for bureaucracy to run its course. It never has, and never will.

The past two summers were long, hot, and stressful for many of us, and climate research suggests that it is reasonable to expect that our forests will see more fire. How we adapt to this increased presence of fire has to evolve beyond simply relying on fire suppression. We have to think hard about how much fire we can live with.

We also have to think hard about the information we come across as it relates to wildlife and the ecosystems that support them. Especially when that information isn’t backed by a historical perspective, experience in the field, or science. In many cases, our human-centric views of what’s good or bad for wildlife are far too narrow minded.

We can rest assured that, from a wildlife perspective, there will be good things to come out of the fires that we’ve experienced over the past few years. If we truly care about wildlife and the habitat they need to prosper, we must acknowledge there is a silver lining to a summer of smoky skies.

A registered professional biologist, Jeremy has spent 20 years working across the province as a natural systems scientist in both federal and provincial government positions. For the past 5 years, he has operated a small consulting company out of Salmon Arm, B.C.

Sign up for news, recipes, and upcoming event announcements

Learn More From These Articles